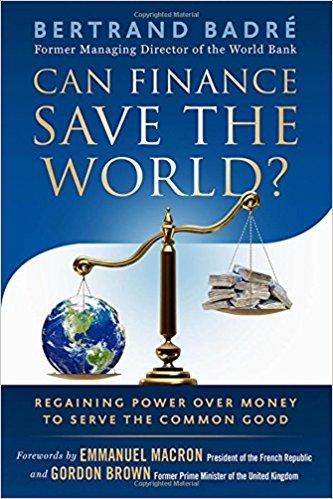 Author Bertrand Badré of “Can Finance Save The World?” Berrett-Koehler, (2018) served in top executive jobs at Lazard, Société General and Credit Agricole in Paris before becoming Managing Director of the World Bank and representative at G-7 and G-20 summits and chairing the World Economic Forum’s Global Future Council. French President Macron tells in his Foreword of his many years discussing global financial issues with Badré. They share the view that global finance has gone astray and that the 2008 crises “lifted the veil on this pernicious system. “They believe that there is an urgent need to regain control of the global financial system and steer it toward meeting the investment opportunities in shifting to the low-carbon energy transition, cleaner greener economies and a healthier human environment. All this is set forth in the United Nations (UN) Sustainable Development Goals (IISD.org) to achieve by 2030 and ratified by 195 nations in 2015.

This global agenda is now widely-shared and adopted by many retail and institutional investors, asset managers, government agencies, mayors of many cities, as well as civic groups and grassroots globalists. The SDGs are proving to be the new economic development roadmap and metrics beyond conventional GDP-growth goals. France’s Macron and Germany’s Angela Merkel now share this leadership vision for the European Union (EU) for its future without Britain, as well as former UK Prime Minister Gordon Brown. Brown’s focus is also on the huge opportunities in re-designing public and private financial instruments and flows toward investing in the 17 areas covered by the SDGs: reducing poverty; zero hunger; good health and well-being; quality education; gender equality; clean water and sanitation; affordable and clean energy; decent work and economic growth; industry innovation and infrastructure; reduced inequalities; sustainable cities and communities; responsible consumption and production; climate action; life below water; life on land; peace, justice and strong intuitions and lastly partnerships for the goals.

Clearly, institutional investors are also on board after all the commitments made at President Macron’s “One Planet Summit” in Paris, December 2017. Many pension fund managers now see green bonds for financing green infrastructure as investments well matched to their time horizons and beneficiaries’ needs. Many were also in Paris making commitments to divest from their fossilized assets and shift to the low-carbon green investment sectors now expanding. Thus, New York City’s recent announcement that its pension fund will divest from fossil assets was less surprising than its decision to sue oil majors for some of the cost of SuperStorm Sandy, claimed due to their CO2 emissions.

Author Badré calls participating in 2008 in the G-20 meeting and the Financial Stability Board by observing “If we let finance continue on the path that led to the financial crisis —- serving the elite and feeding the speculators profiting from harnessing the power of finance in narrow self-serving ways — then we are certain to drive up the level of discord. People will continue to feel increasingly disenfranchised and nationalism and protectionism will accelerate”, (page 2). He adds, “Finance is not the master and should not be manipulated by elites. By using finance as a servant, we can re-position its use. We need to set the agenda for financial inclusion and give access to everyone”. This stark critique reflects Badré’s experience as a private sector banker. He also sees the potential of the fintech revolution, disintermediation and how re-structuring can redirect finance.

Each chapter of this book addresses such re-structuring, with well-thought out proposals for extending private financial tools and shaping them for public sector finance: securitization, infrastructure bonds, catastrophe insurance, leverage and public-private partnership to address the 17 goals of the SDGs. Designing frameworks for such new levels of prosperity and security are seen as essential, while keeping the public purpose firmly in the forefront in managing such new financing, in line with the UN summit on Financing for Development held Addis Ababa in 2015. He discusses how to turn to the billions for development in current UN agreements into the trillions that can be usefully deployed in teamwork with private institutional investors such as those of the group, Principles of Responsible Investment (PRI) with global AUM of some $60 trillion. For full disclosure, my company, is a signatory member of PRI.

Badré looks at each of the current institutions inherited from Bretton Woods and how they can be re-shaped for today’s challenges. He sees the multilateral development banks (MDBs) re-purposed using tools adapted from private banking and insurance, and how they can leverage their funds in collaboration with the World Bank, UN agencies and private institutional investors with their $100 trillion of AUM. Badré applauds China’s initiative in the Asian Infrastructure Investment Bank (AIIB) and the new BRICS development bank as new partners for the World Bank and the European Investment Bank. The focus of all is on building the needed new global infrastructure supporting inclusive, cleaner, knowledge-richer greener economies worldwide.

Today, as the USA experiences gridlock and confusion, the world is not waiting. The new G-19 (without the USA) is moving forward on the Paris climate accords along with the private sector companies group “We’re Still In”. China is pushing ahead with its Belt and Road infrastructure connections with Europe via the old Silk Road. Badré supports these new initiatives, as well as expanding the outreach of the World Bank which he opened internet access to its knowledge and experienced professionals. He also supports a small levy on airline tickets and financial transactions and other ways of raising development capital for this worldwide infrastructure.

I approached this book with my usual skepticism for large international agencies and their inevitable bureaucratic and often illusory levels of abstraction. This book surprised me with its granularity, clearly born of real world experience and hands-on competence along with Badré’s passionate vision. He sees real possibilities for progress toward materializing these visions through the coalitions around achieving the SDG goals by 2030. I share this optimism since breakdowns always drive breakthroughs. Stress is evolution’s tool in all biological species, including humans! We evolve through adaptation to new conditions and environments and their stresses, and so do our institutions. I floated many similar proposals in my “Building A Win-Win-World” (1996) now an e-book, describing the inevitable levels of cooperation in today’s world of global problems too big for any single country to solve alone. I also called for a small financial transaction tax first proposed by Nobelist James Tobin in the 1970s and later by Lawrence Summers, to throw some sand in the gears of global finance – since accelerated by high frequency trading (HFT) as I described in“Perspectives on Reforming Electronic Markets and Trading”.

Badré’s book also addresses threats described in the World Economic Forum’s Global Risk Report 2018. Badré also worked on water risks with many global experts. Strangely, all their efforts were focused on the 3% of fresh water and ignoring the other 97% of the planet’s water which is salty, and the other half of the plant kingdom composed of plants that thrive on salty water (halophytes) already hybridized to meet most human needs for food, fiber and fuels. All can be grown on the planet’s 40% of unused scrub and deserts lands, far into the future! “Green Transition Scoreboard 2014-Plenty of Water”.

Thus, even the most advanced human institutions and research need to widen perception to include overlooked resources. These become visible only in broad system overviews, beyond old silos, theory-induced blindness and other cognitive challenges. Badré’s thinking and those of President Macron provide a useful context for asset allocators, consultants, pension fund trustees, and managers.