“The Third Industrial Revolution: How Lateral Power is Transforming Energy, the Economy, and the World,” by Jeremy Rifkin, Palgrave Macmillan 2011 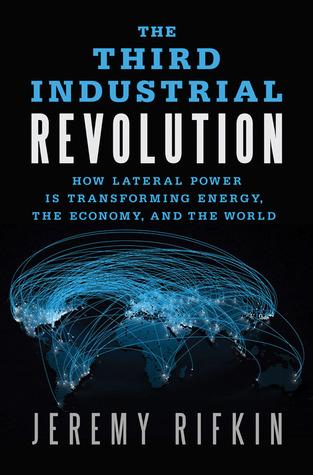 Jeremy Rifkin is one of the most prominent Western public intellectuals – matched by the best in the world: Vandana Shiva and Pavan Sukhdev in India; Niu Wenyuan and Zhouying Jin in China; Daisaku Ikeda and Kaoro Yamaguchi in Japan, James Bradfield Moody and Bianca Nogrady in Australia and Rosa Muraro and Ladislau Dowbor in Brazil; and, Chandran Nair in Hong Kong, to name a few.

Rifkin, in this book , boldly lays out his Third Industrial Revolution and its five pillars:

I confess that I share this vision, which I outlined in my “Politics of the Solar Age” (reviewed by Langdon Winner in the New York Times in 1981). My vision was anchored in what I knew about the unexploited technologies available in solar, wind, geothermal, wave and hydropower and pre-eminently in the huge potential of making our US economy more energy efficient. My colleague Dr. James Fletcher on the Technology Assessment Advisory Board to the US Congress told us at a meeting in the 1970s that if the US had subsidized solar-based energies to the same extent it subsidized oil, coal, gas and nuclear energy, that our country would already be run on solar and renewables. Fletcher went on to become Administrator of NASA, the US space program.

Rifkin reminds us of the vast quantities of free, renewable, inexhaustible energy our planet receives each day from the sun – a point I also continue to stress in Ethical Markets Media’s reports, including our Green Transition Scoreboard®. One hour of sunlight provides enough power to run a global economy for a full year, as Jeremy stresses in his Chapter 2. We humans are now waking up to the costly stupidity of continuing to dig our energy out of the Earth’s crust, suffering the “externalities” of pollution, ill health, depletion and destruction of our biosphere and risking further climate damage. Instead, we can harvest all the energy we need from above ground, and once we create this new infrastructure, the fuel will be free. We are improving on solar collection techniques, scaling them and seeing costs come down. We are almost as good as plants in their photosynthesis in green leaves in capturing solar’s abundance.

However, as I found in the 1980s, the barriers were the incumbent fossil and nuclear industries whose influence over Congress kept their huge subsidies and forced renewables to climb a steeply-tilted playing field. Financial firms with their Fossilized Asset Allocation models, compound the problem by continuing to over-invest in fossil fuels and nukes (Pricking the Carbon Finance Bubble). Climate change is still denied by many US legislators, while the nuclear industries try to maintain their subsidies by falsely claiming they are “carbon free.” They omit all the pollution from mining and enriching uranium with coal, transporting it, building nuclear plants and storage of wastes. Einstein correctly remarked that nuclear power was the costliest, most wasteful way of boiling water.

No wonder Jeremy Rifkin now spends most of his time in Europe, which has officially adopted his “Third Industrial Revolution” and is ahead of the USA in the transition from the fossil-fueled Industrial Era to the Solar Age. Rifkin correctly points out that his “Third Industrial Revolution” requires a shift to a multi-disciplinary systems approach – way beyond economics and the silo problems of our previous industrialism and its hierarchical, centralized institutions. All five of the “Third Industrial Revolution” pillars must be introduced in an integrated fashion to reap the benefits of the transition. Only then will the millions of new small businesses, micro-grids and labor-intensive jobs reach their full potential. He also sees the huge potential of social media, information sharing and services such as Zipcar, couch-surfing, Freecycle as the new cooperative economy grows alongside the old competitive one. I have studied such non-monetary sectors in all countries as the “Love Economy,” that 50% of all productive work that is unpaid and missing from official statistics and GDP. Don Tapscott studied the same sectors in his Wikonomics and Macro-Wikinomics.

Rifkin upends all the assumptions of the early Industrial Era and it economics, finance and business school curricula. I agree and have spent my life writing, speaking and researching what is wrong with economics, finance and traditional metrics such as GDP. Most business models are based on “externalizing” the social and environmental costs they incur from company balance sheets – posting illusory profits and false scorecards of GDP-growth.

Rifkin’s brilliance is accompanied by his savvy activism and social entrepreneurship, consulting with major corporations, governments, heads of state and powerful global institutions from the OECD to ASEAN and many others. Rifkin is a captivating speaker, as I watched him in Paris addressing the 50th Anniversary of the OECD which has followed his advice. The OECD promotes its own Green Growth program, to which I have offered invited comments, as well as its own Better Life Index similar to my Calvert-Henderson Quality of Life indicators with the Calvert Group of mutual funds.

I most enjoyed Jeremy’s deconstruction of the economics’ discipline (never a science) and its professionals. I recall many conversations with Jeremy in the 1970s and 1980s as we both discovered the fatal flaw in economics: the lack of awareness of thermodynamics and how its entropy law invalidated their entire discipline. I discussed this flaw in my “Creating Alternative Futures: the End of Economics” (1978, 1996) and wrote a review of “The Entropy Law and the Economic Process,” the definitive blow which demolished economics by Nicholas Georgescu-Roegen in the “Harvard Business Review” in 1971. I opined that Georgescu-Roegen was the new “Keynes” (who, as a mathematician, had challenged the economic dogmas of his time). Georgescu-Roegen moved beyond economics to system analysis and better science. I remember the delight that I and Rifkin shared in discovering Frederick Soddy, the Nobelist chemist who found the same fatal flaw in economic theories in the first decades of the 20th century. As I noted in my “Politics of the Solar Age”:

“Georgescu-Roegen and Herman Daly] build on the work of Frederick Soddy (1877-1956), an English chemist who shared the Nobel Prize with [Ernest] Rutheford for introducing isotopes into atomic theory… Soddy decided that economists’ dangerous drift into pseudo-scientific abstraction must be halted before they destroyed industrial societies, because their uninformed ideas contravened the first and second laws of thermodynamics. A paper Soddy gave at the London School of Economics in 1921 is entitled “Cartesian Economics.” He asks rhetorically the question that economists are concerned with: “How do men live?” by asking what makes a railway train go. “In one sense or another the credit for the achievement may be claimed by the so-called engine-driver, the guard, the signalman, the manager, the capitalist, or the shareholder – or, again, by the scientific pioneers who discovered the nature of fire, by the inventors who harnessed it, by Labor, which built the railway and the train. The fact remains that all of them by their united efforts could not drive the train. The real engine-driver is the coal. So, in the present state of science, the answer to the question how men live, or how anything lives, or how inanimate nature lives, in the senses in which we speak of the life of a waterfall or of any other manifestation of continued liveliness, is, with few and unimportant exceptions, BY SUNSHINE.” quoting from Frederick Soddy, “Cartesian Economics” (1922)

As a European by birth, I also agree with Rifkin that Europe, despite its current tribulations, is a model for much of the world, as Asians and Latin Americans emulate its laudable efforts to harmonize the politics of 27 different nations in an often-fractious but cooperating pooling of their sovereignties after centuries of wars.

This book is required reading for corporate and financial executives, asset managers and all who want a peek into the prosperous, viable green future awaiting us all. Rifkin and his wife Carol Grunewald authored an earlier prophetic book, “Voting Green,” in 1992. Would that we had followed their advice then – we might now be further into this great green transition to global sustainable societies as we meet in 2012 at Rio+20 in Rio de Janeiro, Brazil. We of the Green Economic Coalition invite all in business and finance to join us!

Disclosure: I have no positions in any stocks mentioned, and no plans to initiate any positions within the next 72 hours.